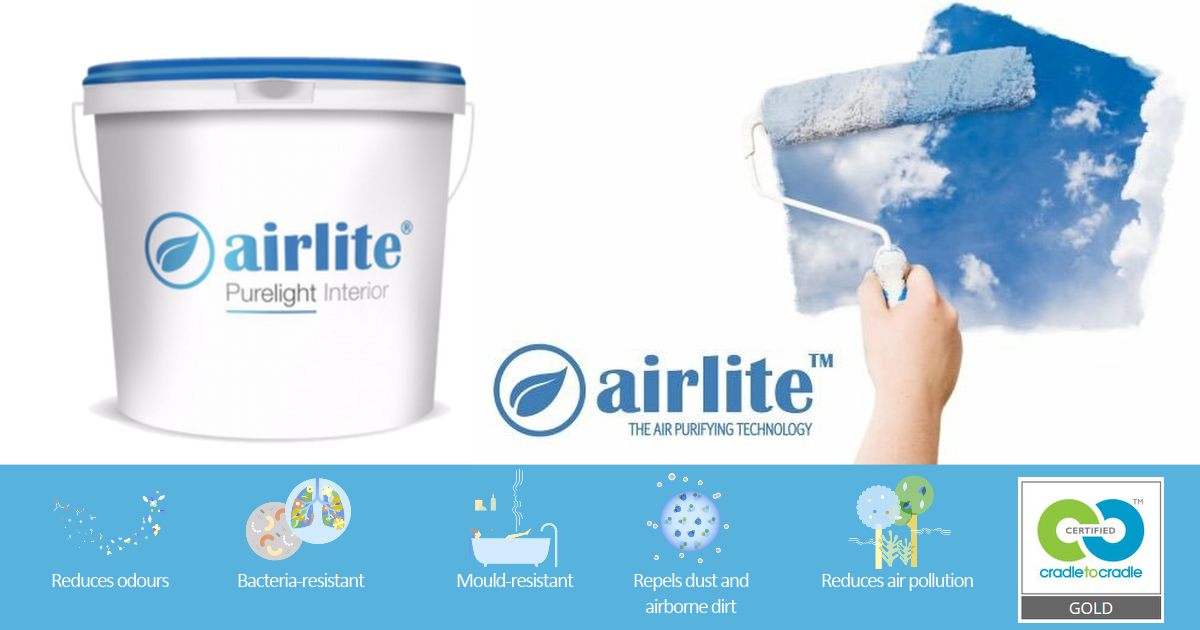 The average person in the UK spends just 8% of their time outside according to Professor Holgate of the Royal College of Physicians1. Yet there is very little research into the aggregated effects of exposure to pollutants such as kitchen products, faulty boilers, open fires, fly sprays and air fresheners, all of which can cause poor air quality in our homes, workspaces and schools 2.

We found some research of the aggregated effect of fragrances in household products used indoors on the BBC's Trust Me I'm a Doctor programe. Once they are released into the air inside our homes, they don’t just disappear. They react in the air to form new chemicals, which could be potentially harmful 3 like for example formaldehyde.

Other studies have shown that in some schools children are being exposed to higher levels of damaging air pollution inside the classroom than outside 4. Another report from 2016 said that three-quarters of UK children spend less time outside than prison inmates5! (UN Guidelines stipulate at least one hour of suitable exercise for prisoners in the open air daily).

It's with information like this in our minds that we headed to EcoBuild 2018 in London earlier this year on the hunt for new products and more information about how to improve indoor air quality. 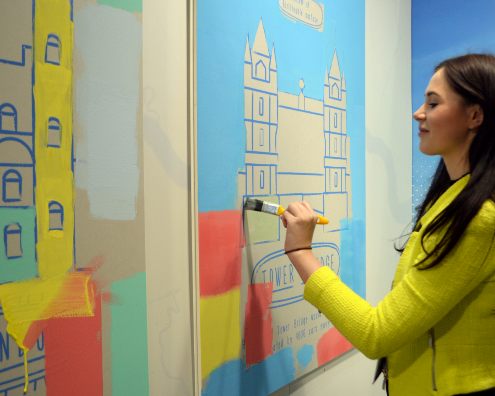 Invented, tried and tested in Italy since 2007, the Airlite Paint range was launched to the UK market at EcoBuild in March 2018. We took the opportunity to try out the paint and chat to the Airlite Team during a quiet spell during the show. It seemed too good to be true.We sell products that do some of these things, but not one that does it all.

Airlite is a paint range that;

What makes this product really stand out is the amount of certification and testing they have done to prove all of their claims.

There was just one problem they didn't intend to sell to the retail market, instead they planned to focus on large contracts and infrastructure projects like hospitals, schools, air quality in tunnels and the like.

We sent a nice email to the Airlite team after the show saying that when they are ready to sell the paint to the general public we would love to sell it and left it at that.

To cut a long story short, by August the whole Celtic Sustainables team had the chance to try the Airlite Purelight Interior Paint and Airlite Primer here in our Cardigan Office with a view to stocking it for sale. We like to try out the products properly when ever we can before we sell them so that we can honestly say we have used the products and give our customers advice based on experience.

Application of the Airlite Purelight paint is different to the other paints that we sell in three ways:

The paint was pre-mixed at Ecobuild, so none of us had any idea how easy or difficult it would be to prepare and apply the paint within the timeframe. Neither had we experienced the smell and texture of the primer. This final testing was crucial to us when making the decision about whether to offer the paint for sale.

Followers of our instagram and facebook pages will know that wall space in our showroom is alllocated to colours from our paint ranges, so we decided to use the white Airlite Purelight paint to spurce up the walls in the area that we all sit (behind the showroom - but still visible from the showroom). 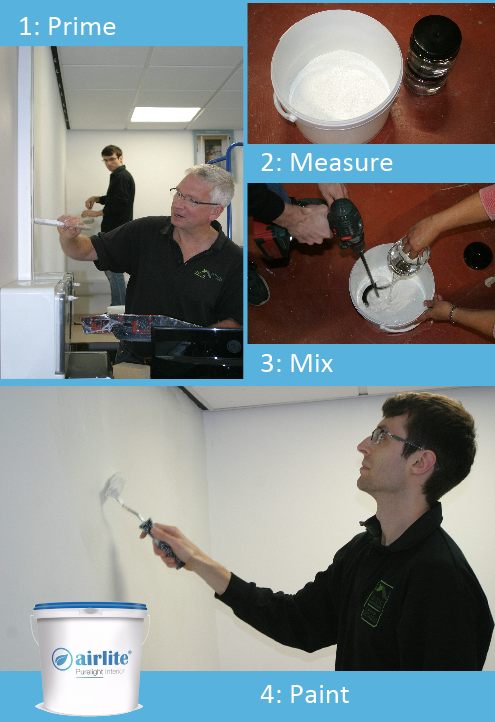 We decided to paint the shabbiest looking section of office wall. The one that we'd moved shelves but not filled in holes.

First job was to make the wall sound by filling in the holes and minor cracks with a filler. There wasn't a lot of making good to do, so we chose the powder wall filler so we could mix as much as we needed.

Once the filler had dried and had been sanded down the Primer was easy to apply. It arrives as a liquid paint, so very straight forward.

Using the Airlite Primer is required to ensure the 10 year warranty on the air improving qualities of the paint.

The primer does have a bit of MIT in, which some of our members of staff are sensitive too - another reason to actually try the paint. However with open windows and doors it didn't affect them any more than other regular "high street" paints with similar levels. We recommend though that people with MIT sensitivity have a chat with us before purchasing the primer.

We primed the wall the day before painting with Airlite Purelight.

The Airlite Purelight Interior Paint arrives in powder form. We love this because it's a lot lighter to transport and so saves on it's carbon footprint. It also means that you can mix as much as you need and save the rest without the risk of it solidifying (as long as it's stored properly) - so no waste.

There are only two ingredients, the paint powder and regular tap water. Measuring needs to be pretty accurate. Plus, you can only mix just before you start painting as you have to use the paint within a 3 hour window. For us this just meant that we had to pick a quiet time in the office so that we didn't get distracted too much from painting by phone calls and shop customers.

We measured out enough water and powder to cover that section of wall twice - about 10-12m² in total.This equates to 1kg of powder and 0.75 Litres of water.

Mixing is done in two stages. It's handy to have a drill multi-mixer for this task (the kind that attaches to power drills), and a largish clean bucket to mix in.

Sensibly we decided to mix the paint in the warehouse and not in the office - just incase it all went terribly wrong. It didn't! It was quite easy - a bit like whisking a very large batter mix!

We put the powder into the clean bucket and added 0.4 Litres of the water to it. We mixed first with a large clean stick, then, when it started to bind together, switched to the drill multi-mixer, gradually adding in the rest of the water and increasing the speed of the drill.

Once all the water was added we continued to mix and stir making sure all of the powder was mixed in. When the paint was at the desired consistency (creamy) it was time to paint.

When you do this, make sure you read the full instructions that are provided with the paint.

We checked our watches before we started so that later we would know how far along the 3 hour painting window we were.

Everyone was eager to try the paint and show off their "cutting in" skills.

The Airlite paint was very easy to apply by both brush and roller. It covered well (we were going over an off white) and dried very fast. It was the height of summer when we were painting and we had all the windows and doors open, even so, we were very impressed by the drying time.

The paint got thicker the closer to the end of the 3 hours we painted. Three hours in, it was still easy to paint with but we could imagine that beyond those three hours there would be a point where it would be difficult, if not impossible to use. So we definitely recommend only mixing as much as you can comfortably paint within 3 hours.

We managed to get two coats of paint on the small section of wall within the 3 hours. Remember though it was an exceptionally hot day here in Wales and we had up to three people painting that little wall at a time. If we had attempted to do this on a cooler or wetter day the drying times would of course have been different.

Unfortunately we have no way of monitoring the air quality in the office at the moment. It would be something that would be very interesting to do though. So watch this space.

Anecdotally, one member of staff who had been on holiday when we painted and returned the Monday after said that the office smelled different on his return - fresher, but really we prefer more scientific evidence. For that we rely on the experts and the testing that has been done on the paint during it's development in Italy.

We are very impressed with the Airlite Purelight Interior Paint. So much so that we are very please to be, exclusively, the only stockist of Airlite paint in the UK!

If you are interested in finding out more about the paint, please do contact us or watch the videos on the product page.