​Heat loss in a house - Information is Power!

Posted by Celtic Sustainables on 24th May 2022

With electricity bills set to rise, we jumped at the chance to find out more about heat loss in a house with the free domestic thermal imaging survey offered by a local community society Cwm Arian Renewable Energy (CARE).

Cwm Arian are offering free domestic thermal imaging surveys to homes in Pembrokeshire, Ceredigion and Carmarthenshire until the end of June 2022. We found the information provided by the heat loss survey incredibly interesting and utterly useful.

Daniel from Cwm Arian expertly guided us though this survey one late afternoon. As we waited for the air outside to cool down further, he ran us through some very interesting information about behavioural changes and different types of insulation that could help save electricity or gas and how much money we might expect to save.

Putting energy saving theory into practise. While Dan was setting up the extractor fan he let us loose about the house with a plug in device that measures energy use for electrical items that are on standby.

One of the electrical products that doesn’t get switched off regularly in this household is the old microwave. It sits on the kitchen worktop, with its lights on, showing the wrong time and is rarely used.

We all know it and shouldn’t need to be told, but it was very good to be shown and to then calculate the savings. A very easy way to save electricity is to turn off electrical appliances when they are not being used. Off means off and not just off/on standby.

Heat Loss in a House

When the extractor fan had been fitted in the door to the outside and turned on, the places this house was losing heat were very easy to see.

With the thermal heat camera attached to Daniels iPad (and the associated app) we checked the obvious potential sources of heat loss: windows, doors and loft hatches. The thermal heat map showed where the frames hadn’t been properly sealed and we could feel the cool draught of air being pulled through the house by the extractor fan in those gaps by placing our hand near the areas shown on the thermal image.

Some heat loss areas in this house were surprising.

“I thought I knew where all the draughts in this house were coming from, but from the thermal heat survey we have found 4 or 5 new sources of heat loss that I would never have found during normal observations”. Homeowner. 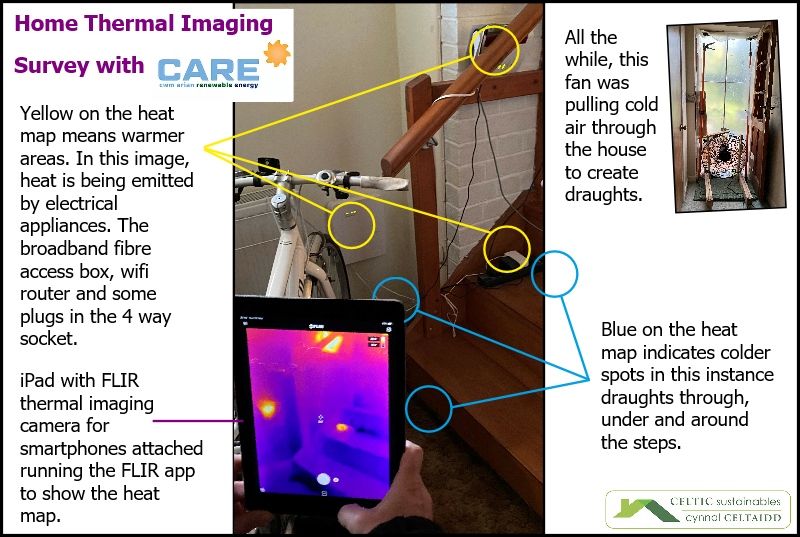 The connecting steps and wall between the older part of the house and new (shown in image above) was an area of significant heat loss. Shockingly, the carpet could even be seen to rise as the air from underneath it was being sucked through the house. What was assumed to be just an old unfilled drill hole from hanging a picture frame in that area was pulling so much air through that it is likely that it goes through to the cavity wall and into the roof space and on closer inspection the wooden architrave in that area was also leaking significant amounts of heat.

One job that was already on the to do list – fix the extractor fan pull switch in the bathroom – has now been brought to the fore as it was letting through so much air it was making a whistling sound!

Daniel encouraged us to check places where pipes go through the external wall too, for example, the gas boiler flue, toilet waste pipes and washing machine pipework.

Encouragingly where off cuts and left-over bits of  insulation had been used around pipework and ducts no heat loss could be seen. Where an interior gap sealer had been used around window frames the heat loss was also minimal (but the survey did show a few areas where the applicant hadn’t been so fastidious!).

Did you know that if you live in Wales and are on certain benefits, or suffer from a chronic respiratory or mental health condition you might qualify for free energy efficiency improvements on your home from the NEST scheme? nest.gov.wales/

Other schemes are available in England and Scotland too. Use your postcode to find out what grants for insulation and home energy improvements are available near you:  www.gov.uk/improve-energy-efficiency. For Northern Ireland check out: www.nidirect.gov.uk/articles/insulation.

For futher information about the free domestic thermal imagine survey provided by CARE please go to the Cwm Arian website . Note (at the time of writing) they can only offer the survey to homes in Pembrokeshire, Ceredigion and Carmarthenshire until the end of June 2022. 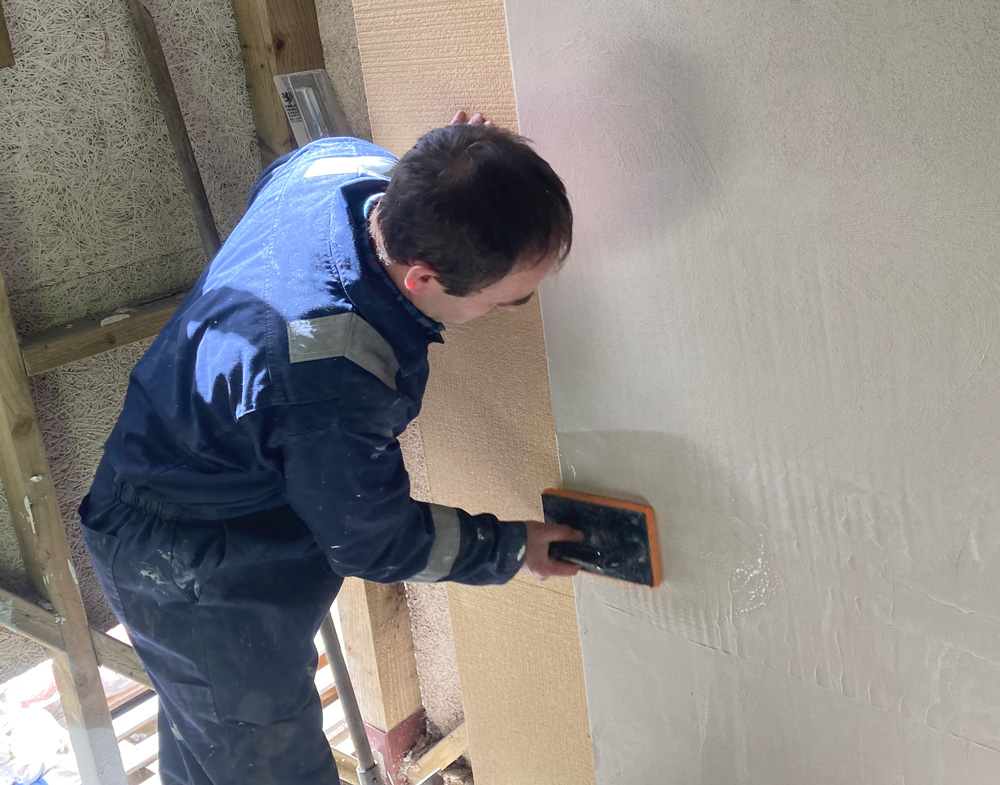 After a couple of years of being locked away in our home offices, and only speaking to suppliers via video calls it was great to finally get out and visit Lime Green’s centre of operations. The main offering from the forward-thinking manufacturer is a full range of ready mixed lime mortars, plasters and grouts, developed and manufactured onsite, by [...] 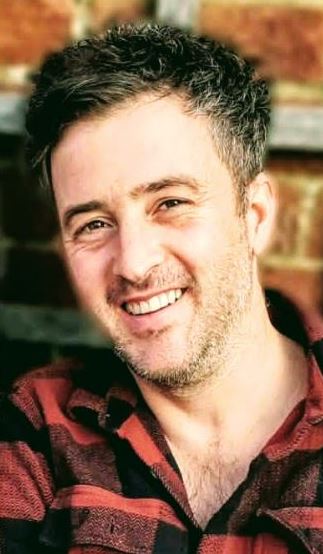 We love it when people and companies come back to us time and time again for sustainable products. Here we catch up with Aaron (aka Dr Damp) from Sussex Heritage Damp Restoration to find out exactly what he's been up to.Tell us a bit about yourself and how you started SHDR?I am a fully trained property [...] 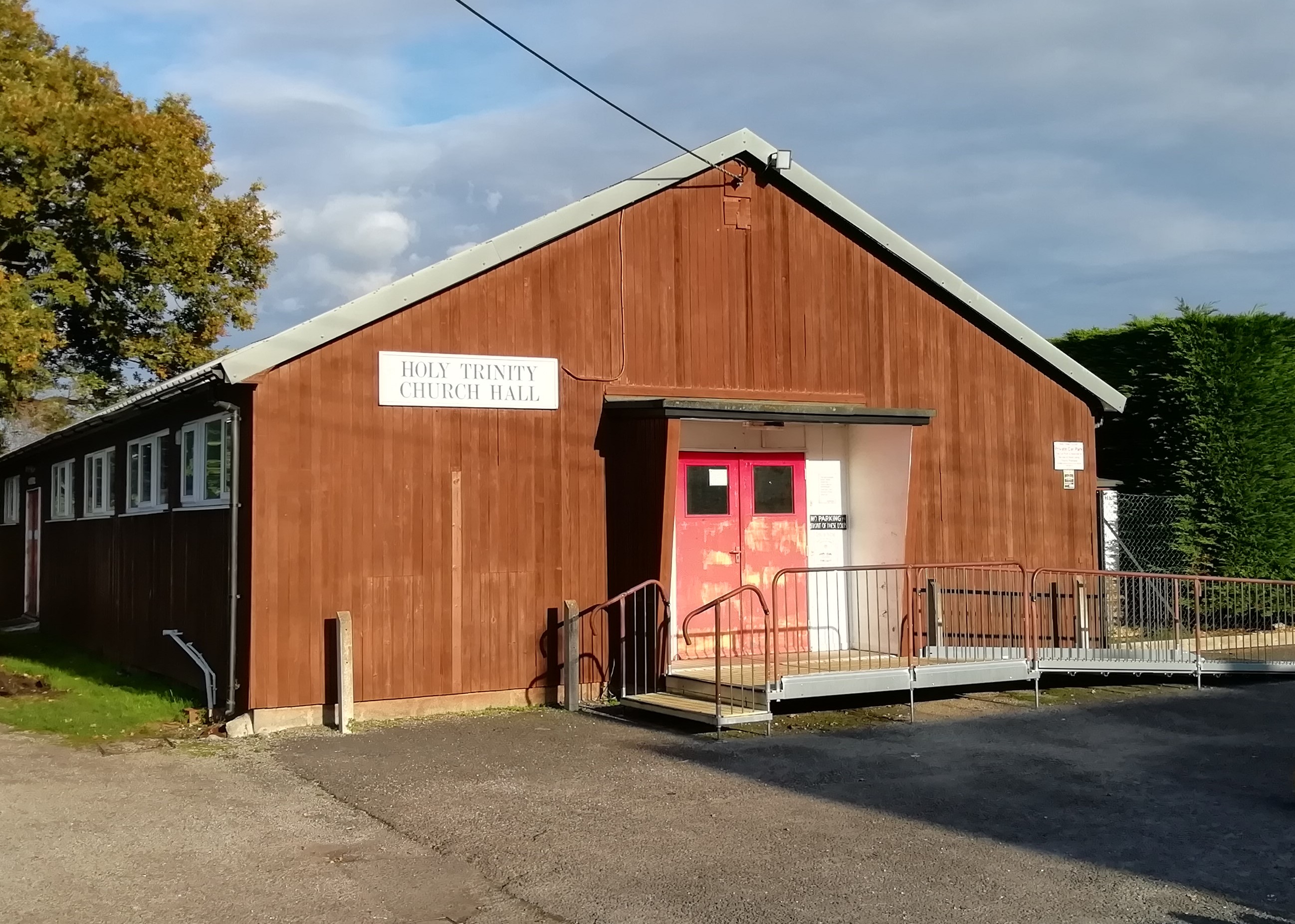 Installation of insulation in a community village church hall 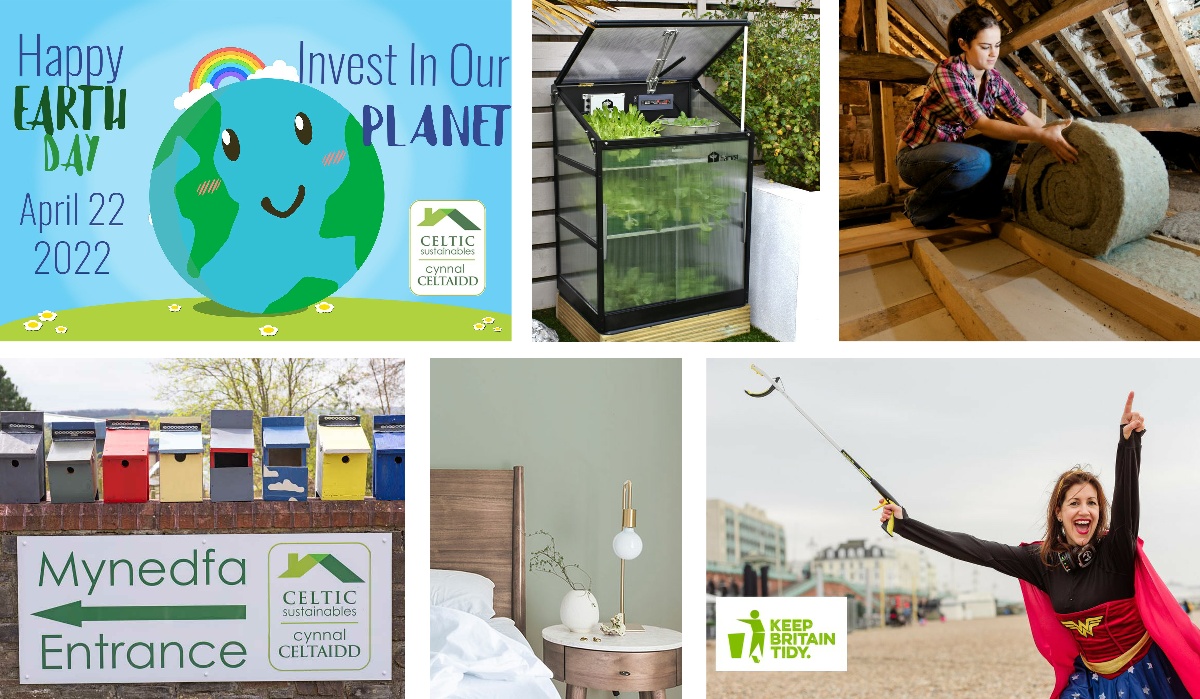 A few ideas for Earth Day that are quick and easy to do. They are things we have done here at Celtic Sustainables, we hope you find them useful.10 Easy Earth Day Ideas Swap Plants. It may be a little early in the growing season to swap plants, but you could start a plant swap group [...] 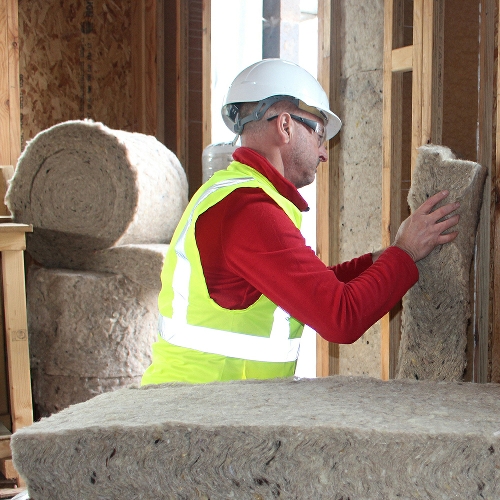 We are getting a lot of enquiries from people who want to understand the Spring Budget headline statement of no VAT on energy saving things like  insulation from the 1st of April 2022.  We have tracked down the detail at this  Government web page. To cut a long story short, the news is very disappointing if you are looking [...]

When we saw Rosie purchasing cosywool insulation from us, along with a Novia vapour control layer, we had to get in touch and find out what her project was about. We were excited (and a little bit jealous!) that she is in the process of converting a van into a campervan. It can be a little bit daunting starting a project [...] 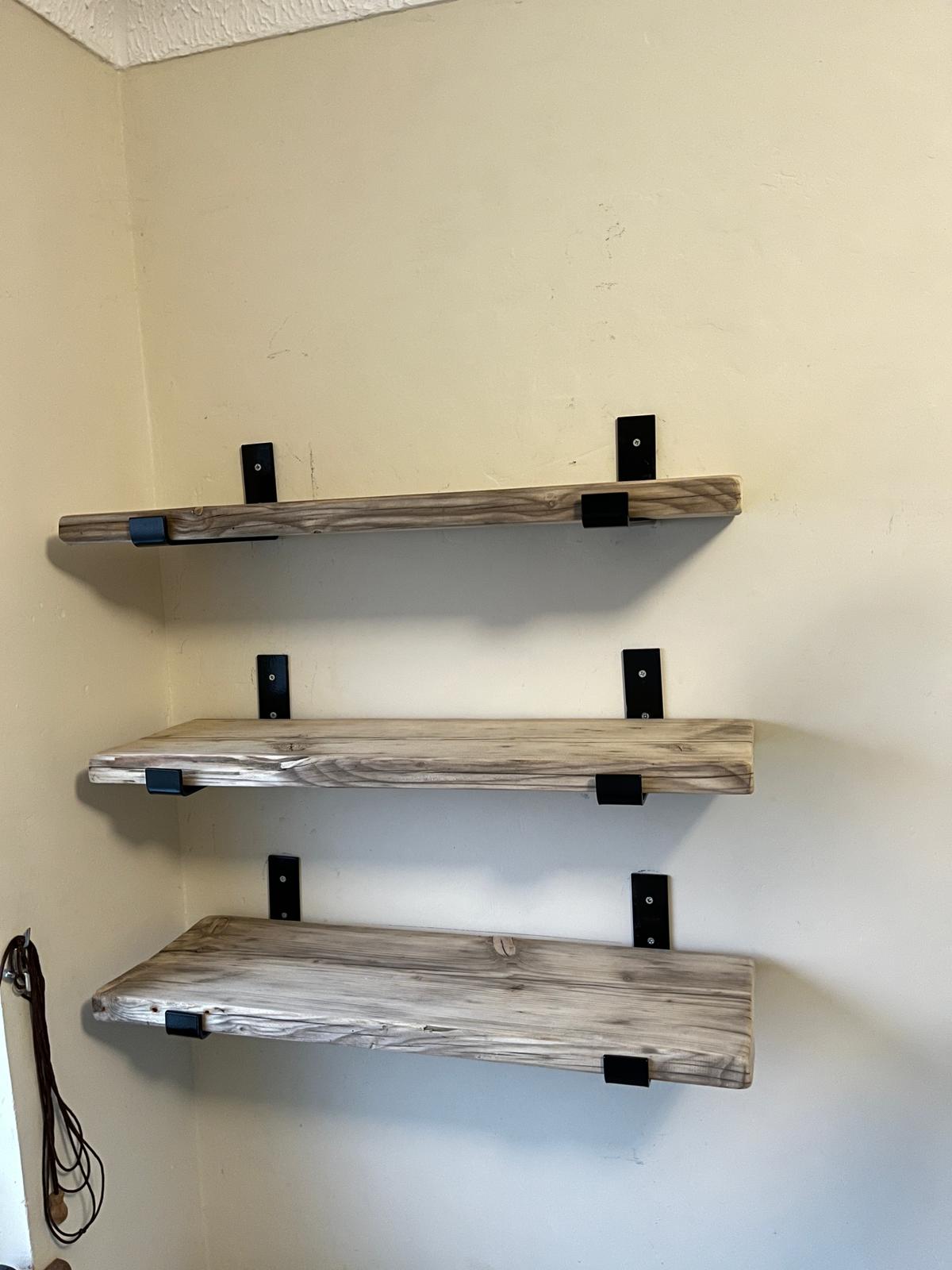 We’re all looking for ways to reuse and recycle different materials now, and it’s no different for our Sharon who’s currently renovating her family home. Reclaimed scaffold boards are versatile, easy to work with and can be used to create all sorts of furniture in your home. They are perfect if you want to get a little bit creative [...] 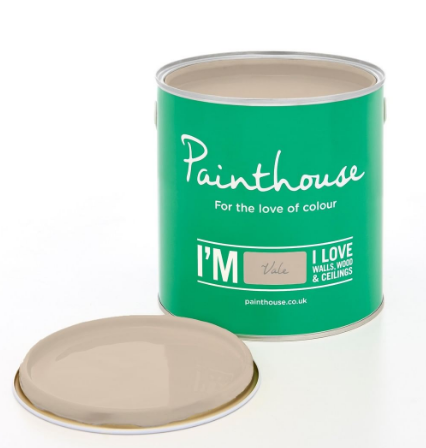 Introducing their new colour, Vale. March 2022It can be difficult to know where to start when it comes to updating your home décor, especially when using a neutral pallet. If you’re looking at giving your home a much-needed refresh, look no further! Last year Painthouse launched a new colour in their Painthouse Modern Living Range, ‘Vale’, it’s a [...]